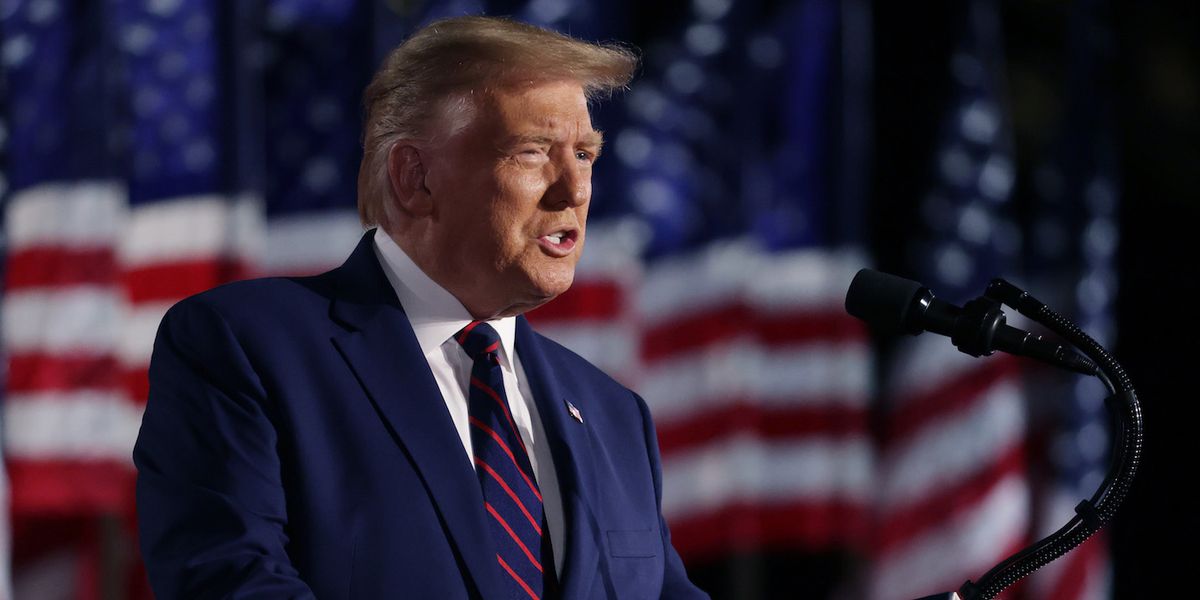 President Donald Trump accepted the Republican nomination for president “with a heart full of gratitude and boundless optimism,” and issued a rebuttal to the Democratic view of America as a deeply corrupt and unequal nation in need of revolutionary reform while hammering Democratic nominee Joe Biden and his party as socialist radicals.

“America is not a land cloaked in darkness,” Trump said. “America is the torch that enlightens the entire world.”

The president questioned how Democrats could lead the United States while being so focused on criticizing the country and characterizing it as a place of deep racial and economic inequality.

“They see a wicked nation that must be punished for its sins,” Trump said. “Our opponents say redemption for you can only be gained through giving power to them.”

Instead of relying on government, the president said, “we put our faith in almighty God.”

President Trump highlighted Biden’s long career in politics and portrayed him as a betrayer of America’s blue collar workers.

“For 47 years, Joe Biden took the donations of blue-collar workers, gave them hugs, and even kisses,” Trump said, letting the line hang in the air for comedic effect, “and then told them he felt their pain—and then he flew back to Washington and voted to ship their jobs to China.”

President Trump: “For 47 years, Joe Biden took the donations of blue-collar workers, gave them hugs, and even kisse… https://t.co/IYV3ytgg7n

Trump attacked Biden on trade policy toward China, on abortion, and on his approach to COVID-19. He criticized Biden for advocating for COVID-19 lockdowns, although the president himself was supportive of the lockdowns that began in March, and has claimed they saved millions of lives.

The overall theme of the speech, which at times devolved into a somewhat dry recitation of the president’s accomplishments, was that this is “the most important election in the history of our country” because Biden is a “Trojan horse” for a far-left socialist agenda that will jeopardize the safety and economic wellbeing of Americans.

“At no time before have voters faced a clearer choice between two parties, two visions, two philosophies, or two agendas,” Trump said. “We have spent the last four years reversing the damage Joe Biden inflicted over the last 47 years. At the Democrat convention, you barely heard a word about their agenda. But that’s not because they don’t have one. It’s because their agenda is the most extreme set of proposals ever put forward by a major party nominee.”

Others criticized Trump’s use of the White House for a campaign event. Trump acknowledged that criticism, unapologetically.

“What’s the name of that building?” Trump said as he turned around to look at the White House. “The fact is, we’re here, and they’re not. And that’s because of you.”

Thousands marching in migrant caravan to US demand Biden administration ‘honor its commitments’
Beijing’s Parting Gift to Former Trump Officials
Los Angeles Health Crisis Could Be Repeated Across the U.S. in the Next Few Months
Biden accuser Tara Reade says it was ‘unspeakably hard to watch the man who assaulted me’ take the oath of office
Sharing the Senate