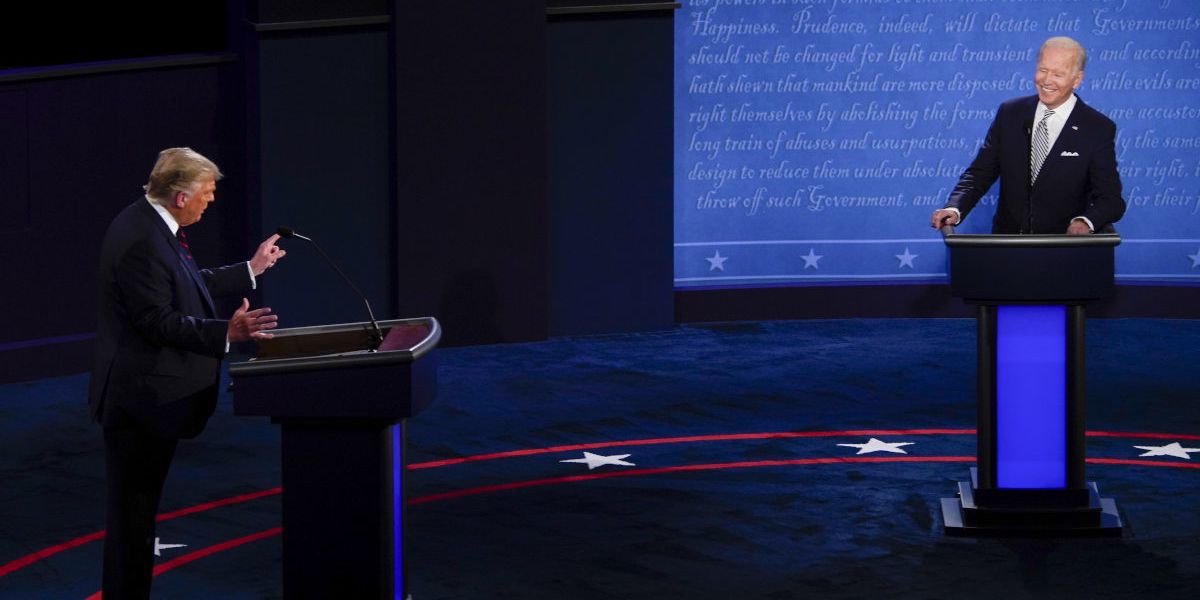 President Donald Trump and Democratic nominee and former Vice President Joe Biden clashed over coronavirus restrictions and the economy during Tuesday night’s debate, with Biden attacking Trump for shutting down the economy.

Responding to a question from moderator Chris Wallace, Trump said Biden would have been incapable of handling the coronavirus pandemic, noting that Biden criticized his early action to shut down travel from China at the onset of the pandemic as “hysterical xenophobia.”

The president also criticized the Obama administration’s handling of the H1N1 “swine flu” outbreak, recalling that even Biden’s
former chief of staff said “it is purely a fortuity that this isn’t one of the great mass casualty events in American history.”

In response, Biden blamed the economic shutdown during the pandemic on Trump.

“There was no economic recession. We didn’t shut down the economy,” Biden said. “This is his economy, he shut down.”

Biden’s claim isn’t accurate. There was no federally mandated economic shutdown ordered by the White House. In fact, President Trump was criticized for resisting calls for a
national stay-at-home order. The president’s position was to give state governors flexibility to determine what coronavirus restriction were necessary in their individual states, and that’s exactly what happened. Coronavirus restrictions on businesses and public places were imposed at the state level.

Biden, on the other hand, said in August that if elected, he would
impose a national stay-at-home order if scientists recommended such action to combat a returning surge of the coronavirus this winter.

Trump accused Biden of wanting to shut down the country.

“He wants to shut down this country, and I want to keep it open,” Trump said.

President @realDonaldTrump: Joe Biden wants to shut down the country, I want to keep it open

Polly J. Price, a professor of law and public health at Emory University,
told NPR in April that while the federal government has the power to issue an advisory, it cannot compel states to shut down businesses. That power remains excursively a state power.

Man suspected of raping woman in Kroger bathroom chased down and held at gunpoint by marine veteran
Marine Le Pen to French Generals: “Join Me in the Battle for France”
How a Small Midwestern City Was Smeared in the Unaccompanied-Minors Debate
College Professor Fired Without Hearing after Accusing Black President of Anti-Semitism
Out-of-Control Chinese Rocket Will Impact Earth This Weekend. Here’s What We Know.