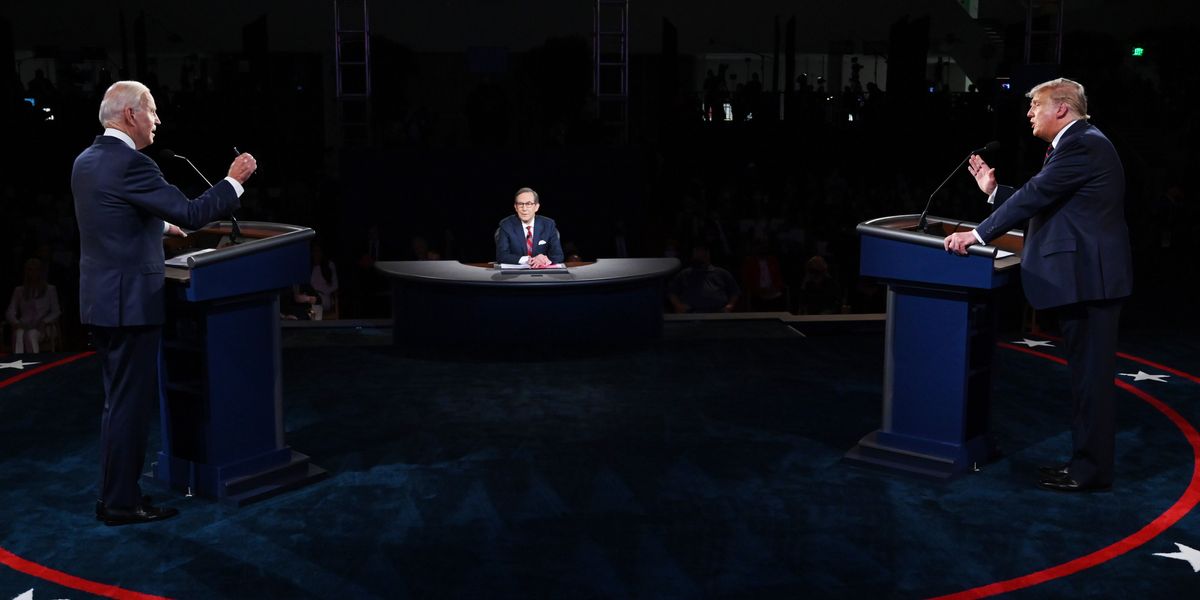 Social media criticized Wallace during — and after — the debate, saying that he was largely useless in actually moderating a the debate between President Donald Trump and former vice president and Democratic presidential nominee Joe Biden.

What did people say about Wallace?

Chris Wallace has completely lost control of this debate.

CNN’s Oliver Darcy said Tuesday night, “[Wallace] lost control of the debate early, and failed to ever regain order. It appeared as if Wallace were pleading with Trump to respect the forum like a parent would plead an out-of-control child to behave.”

Commentator and former CNN, Fox News, and NBC anchor Greta Van Susteren added, “This is why Chris Wallace lost control of the debate — his first question was not about what either would do for the country going forward but designed to create a fight. Once you lose control of a debate, you can’t regain…”

Van Susteren shared Wallace’s first question in a screenshot, which read, “My first question to both of you tonight, why are you right in the argument you make and your opponent wrong? And where do you think a Justice Barrett would take the court? President Trump, in this first segment, you go first. Two minutes.”

This is why Chris Wallace lost control of the debate-his first question was not about what either would do for the… https://t.co/dpy0CMP4PJ

Jeremy Boreing, the Daily Wire’s co-founder and co-CEO, wrote, “How does Chris Wallace keep his job? I understand the defense of his treatment of Trump during interviews and largely agree, but this was a presidential debate. His performance was as bad as we’ve ever seen. Disgraceful.”

How does Chris Wallace keep his job? I understand the defense of his treatment of Trump during interviews and large… https://t.co/JonPcpSrh7

Legions of other social media users issued the same sentiment: that Wallace failed in his duties to maintain a semblance of order or decorum during the first 2020 presidential debate.

What did people say about Rogan?

Rogan himself recently offered to moderate one of the 2020 presidential debates.

During a recent episode of his podcast, “The Joe Rogan Experience,” Rogan set forth his ideal conditions.

“First of all, I want no one else in the room, just the three of us,” he said. “And you’d have to stream it live so no one can edit it, and I would want them in there for hours. … If they wanted to do that — they both wanted to come here in Austin [Texas], sit down and have a debate — I would 100 percent do it.”

The president himself heard word of Rogan’s early September remarks and signed off on the proposal, writing “I do!” to a Twitter user who shared the news and wrote, “[W]ho wants this [to happen]?”

Cyclist Lance Armstrong tweeted, “What happened to this idea that @joerogan ought to host a presidential debate?! Time to restart that conversation.”

What happened to this idea that @joerogan ought to host a presidential debate?! Time to restart that conversation.

Joe Rogan should have run this debate #Debates2020

Journalist Tim Pool chimed in, tweeting, “I feel bad for Chris Wallace[.] Stop bringing in these old fogies and bring in someone with the skill and an understanding of modern media[.] We all know Joe Rogan is the only one who can handle a real debate between Biden and Trump[.]”

I feel bad for Chris Wallace

Stop bringing in these old fogies and bring in someone with the skill and an understa… https://t.co/XDsBSsZq8x

A petition calling for the very same scenario gained traction in 2019.

A portion of the Change.org petition says Rogan would be the perfect moderator because he has “revolutionized the way political interview and discussion works, as he has provided a long-form media format that has allowed the exchange of ideas to be fully explored.”

At the time of this reporting, the online petition has received more than 285,000 signatures in support.

The second presidential debate is set for Oct. 15 in Miami, Florida, with C-SPAN’s Steve Scully as moderator.

A third and final debate is set for Oct. 22 in Nashville, Tennessee, with NBC News’ Kristen Welker as moderator.