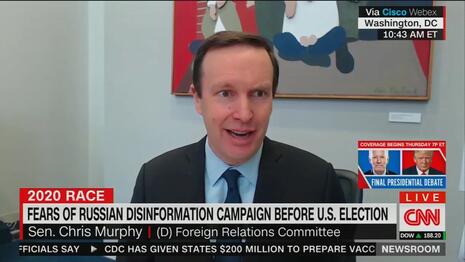 Another day, another attack from CNN on the Hunter Biden story. On Tuesday morning’s edition of Newsroom, the leftist network continued its campaign to squash the story that is damaging their preferred candidate Joe Biden. Today’s pitch was a familiar one, that Russia created the story to interfere in the 2020 election. Co-host Jim Sciutto spread the unfounded narrative: “There are questions about this. The FBI is investigating whether they are or are not tied to Russian disinformation.”

Turning to Connecticut Senator Chris Murphy, Sciutto was eager to help the Democrat push the claims: “I want to ask you directly, you have called these emails as part of an anti-Biden propaganda campaign. Have you seen intelligence that backs that assessment?”

This was asked in spite of the fact that no evidence has been given, or was given by CNN, that in any way ties the Hunter Biden emails to Russia. On Monday morning, the Director of National Intelligence John Ratcliffe went on Fox Business and openly said there was no intelligence linking the two. This was ignored by Sciutto.

Instead, he aided his guest in calling the report into question. Murphy hurled accusations at one of the people who helped bring the emails to light: “Rudy Giuliani is effectively a Russian asset at this point.” Rather than reining in his guest or asking for more information, Sciutto added to the charges: “… a Ukrainian politician that Giuliani has met with and contacted more than once, Andriy Derkach, the Treasury Department described him as a Russian agent for more than a decade.”

That information about Derkach is true, but again, there was no intelligence given supporting that Derkach gave the emails to Giuliani. Even so, Sciutto was happy to let Murphy conflate the two separate issues in order to reject the story all together.

The New York Post has left tremors through the political world since it broke the story on Hunter Biden’s emails last week. Since that time, the left-wing media has refused to do anything more than attack it’s credibility.

Sciutto touted the Senator’s argument that this was all part of an “anti-Biden propaganda campaign,” but completely ignored that pro-Biden propaganda that his network has been pursuing in its coverage.

This CNN bias was sponsored by Google and Audible. Click on the links to let them know what you think.

A transcript of the October 20th Coverage is included below:

JIM SCIUTTO: 14 Days until election day. Millions of Americans have already voted, and my next guest says that Russia is actively trying to help President Trump win and doing it more so than in 2016. With me Democratic Senator Chris Murphy of Connecticut, who serves on the Senate foreign relations committee. Senator, thanks for taking the time this morning.

SCIUTTO: So, first of all, you spoke earlier this month about reports of a multi-layer Russian effort to help Trump in 2020, bigger than what they did in 2016. I’m quoting you from Twitter. How exactly?

MURPHY: Let me just first be clear that it’s not an allegation being made by me or any other partisan that Russia is attempting to manipulation the election on behalf of President Trump that’s the assessment of the intelligence community, that’s the DNI’s assessment. Well they have not put a lot of meat on those bones to try to protect sources and methods, I can confirm that their campaign of misinformation, propaganda and interference is bigger, broader and more problematic than it was in 2016. In particular, because the Russians this time around have decided to cultivate U.S. citizens as assets. They are attempting to try to spread their propaganda in the main stream media, rather than just relying on bots and Facebook posts as they largely were four years ago and they’ve been successful. Rudy Giuliani is effectively a Russian asset at this point. I think made some significant ground above and beyond what they were doing four years ago.

SCIUTTO: That’s a significant charge. I do know, it’s a fact, that Trump’s own Treasury Department has designated a person, a Ukrainian politician that Giuliani has met with and contacted more than once, Andriy Derkach, the Treasury Department described him as a Russian agent for more than a decade. Are you saying in effect that Giuliani is cooperating with Russian disinformation here?

MURPHY: Listen, I certainly can’t say whether Giuliani knows that he has been put in the position of spreading Russian misinformation except Derkach has been labeled a Russian agent. It has been fully disclosed that he is on the payroll of the Russian government. And as recently as a few days ago, Rudy Giuliani is saying he’s not sure if that’s true. It’s 50/50 whether he’s a Russian agent. No it’s 100%, our own intelligence agencies have said it, our treasury department has sanctioned him. So the fact that Rudy Giuliani is providing excuses to keep Durkoch and the Russian FSB as a conduit to him for misinformation that could harm President Biden should make everybody suspicious about his motives.

SCIUTTO: I want to talk about details of documents purported detailing business dealings of Hunter Biden. There is questions about this. The FBI is investigating whether they are or are not tied to Russian disinformation. I want to ask you directly, you have called these emails as part of an anti-Biden propaganda campaign. Have you seen intelligence that backs that assessment?

MURPHY: The very fact that these emails come into the public sphere from Rudy Giuliani, the fact that Andriy Derkach seems to know more about these emails than anybody else, tells you where they’re coming from. At some point you have to believe what you see, which is that individuals who are identified Russian agents or are conspiring with Russian agents are providing the information upon which main stream media are reporting, you have to understand what the deal is here. And again, I’m not alone here. 50 high level intelligence agents came out and said that this is most likely Russian propaganda.

Douglas Murray and His Continuing Fight against the ‘Madness of Crowds’
New York City Will Reopen Public Elementary Schools Next Week
South Carolina Man Converts to Islam, Plots ‘Netflix-Worthy’ Jihad Massacre
CDC testing shows COVID was in the US as early as December 2019
Armed robber demands cash at Philly Wingstop. But customer with license to carry walks in — and puts perp down for good with one shot.