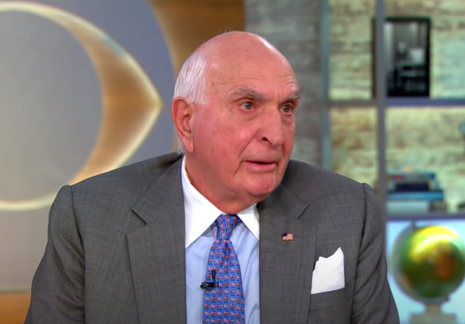 During the October 21 edition of Mornings with Maria, anchor Maria Bartiromo asked Langone for his reaction to both Biden’s and President Donald Trump’s tax plans. Bartiromo noted that Biden, in particular, “wants to raise taxes by $4.3 trillion.” She also said that Biden “wants to take the capital gains tax and the tax on dividends” all the way “up to 43.6 percent.” Langone’s response to Biden in a nutshell? “[T]he middle class will be in peril, and when you take money out of the hands of the middle class, you do a dramatic impact negatively on the economy.”

According to Langone, “You aren’t going to get the revenue numbers by just taxing the rich. The only way a tax increase will generate revenues is to go after the middle class. That’s where the numbers are. These people are being misled. There is not going to be enough money generated from the so-called rich to take care of all the needs.”

Langone didn’t let up, and called Biden’s plan a “fraud”: “It is absolutely a fraud to suggest that all the money that’s going to be needed is going to come from the rich and the super rich.” Biden had stated previously that “[n]obody making under $400,000 bucks would have their taxes raised” under his plan.

Watch the interview below:

Langone said that the problem is that “when you go after the middle class, you begin to attack the backbone of the economy. And we will have a bad recession — we will have a very bad recession. At a point in time when our country can ill-afford tax increases, this is the pitch.” He continued: “And the pitch is based politically on the notion: ‘We’ll get only the rich people. You poor people, you middle class people are going to be fine.’ It won’t work.”

Langone concluded: “[T]hey know it won’t work. The tragedy is, they’ll find out it won’t work when it’s too late.”

Langone isn’t alone in this assessment about Biden’s tax agenda. The Wall Street Journal Editorial Board recently slammed “Bidenomics” based on a new study released by the Hoover Institution. The Journal estimated that Biden’s plan would “raise labor costs by imposing the 12.4% Social Security payroll tax to income above $400,000.” According to The Journal, “The $400,000 threshold isn’t indexed for inflation so it would apply to ever-more Americans as the years go by.” [Emphasis added.]

FLASHBACK: Obama Says Mail-in Ballots Can Only Be Trusted if the Signatures are Verified (VIDEO)
Just Can’t Win: ‘Not the Bee’ Blog Fact-Checked for Reporting News
Fearing 2024 Run, MSNBC Pleads: Just ‘Ignore’ Trump!
The Curious Case of New York’s Flip-Flopping Congressional Race
Trump Might Not Get a Chance to Subtract Illegal Immigrants from the Census