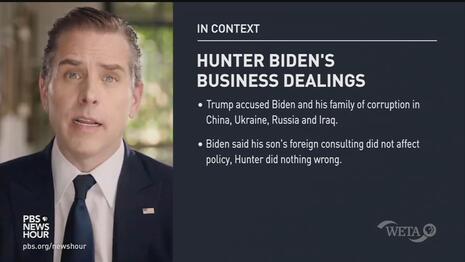 In the PBS coverage after the Thursday night presidential debate, they turned to foreign-policy correspondent Nick Schiffrin for a quick their “fact check” on the president’s statements on Hunter Biden. On screen, they were put “In Context” with the categorical and quite obviously false denials of Joe Biden — Hunter never did anything wrong, ever – and statements by Hunter Biden’s lawyer.

NICK SCHIFFRIN: So let’s take a look at some of this. President Trump accused Hunter Biden being part of what he called a corrupt Biden family. He cited China, Ukraine, Russia and Iraq. And the core of the vice president’s defense is that his son’s foreign consulting did not affect his policy through his 30-plus years in Washington. And that Hunter himself did nothing wrong.

And I think we do want to do a little bit of a fact check quickly on allegations in China. The accusation by the president 3 and others have been that Hunter Biden somehow got 1.5 billion dollars from China. Quickly Judy, hunter was on a board of a Chinese investment firm, that firm had stakes in China– Chinese companies that made cameras that had been actually used in Xinjiang to crack down on Uighurs, had stakes in a company that made Chinese military jets. Hunter’s lawyer said that membership of his, that he had on that board did not pay, and that 1.5 billion was actually a fundraising goal that the investment firm had, not a payment to Hunter. And that none of it went to Joe Biden.

Woodruff added: “And as we heard Joe Biden say repeatedly during this debate, he said none of this is true. It doesn’t add up to anything.”

The Washington Post also pushed a “fact check” that was based on statements by Hunter’s lawyer.

One would think the Islamo-sensitive folks at PBS would see the icky dimensions of this kind of headline: “Hunter Biden’s Firm Invested in China’s Surveillance Tech of Muslims.” John Hayward at Breitbart explained:

The private equity firm of Hunter Biden, the son of former vice president and 2020 Democratic presidential candidate Joe Biden, invested in one of the Chinese companies that created the Xinjiang surveillance state nightmare.

The Intercept reported that Hunter Biden’s Chinese investment company Bohai Harvest RST, which obtains its financing from a subsidiary of the Communist government-owned Bank of China, is part of an investment pool that has made several rounds of large investments in a range of Chinese companies.

The group’s 2017 purchases included an interest in Face++, which provided the facial-recognition software integrated into the smartphone app used by Chinese security forces to monitor the Uighur Muslims of Xinjiang province. The app plugs into a massive central database that collects an incredible amount of information about Xinjiang citizens, ranging from how much electricity they use to their DNA.

The Intercept found it curious that this week’s media coverage of the Chinese surveillance state and its condemnation by human-rights groups did not mention Hunter Biden’s firm’s investments, especially since questions are already swirling around the Biden family’s business ties to China, and eyebrows were raised by Joe Biden’s remarkable refusal to admit China poses a strategic threat to the United States.

On Friday night’s PBS NewsHour, pseudoconservative pundit David Brooks echoed the dismissal: “I think the attempt to bring Biden down to his character level by the attack on Hunter and the attacks on the alleged [?] business dealings with foreign countries. I don’t think that particularly landed. It may have somewhat mobilized the base.”