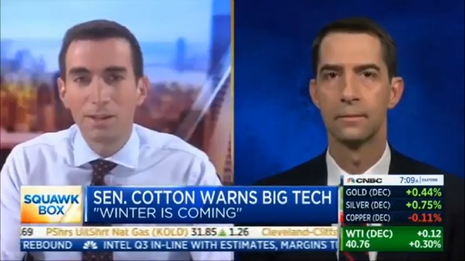 If you ever wanted to see a scene of a mainstream media journalist stunned into silence, welcome to the incident on Friday’s CNBC Squawk Box in which Senator Tom Cotton (R-AR) accomplished exactly that with the show’s co-host Andrew Ross Sorkin.

The other Squawk Box co-host, Joe Kernen, set the stage for the dramatic scene with this observation:

In the last couple of weeks, there have been a couple of issues that really could threaten to at least disrupt or hold back—and possibly even necessary moves to try to rein the companies in. What is, in your view, more important? This Google story, in terms of monopoly with the DOJ, or what we saw with Facebook and Twitter, in terms of deciding whether a news story should be circulated? I’m talking about Lapgate, the New York Post reporting on Vice President Biden and his son.

After noting that social media companies such as Facebook and Twitter have been given total immunity from any kind lawsuit for what is published on their platforms, Cotton went on to talk specifically about the suppression of the Hunter Biden laptop story.

The New York Post reported on Hunter Biden’s alleged business dealings; it had many emails and other documents. Now, maybe those are not authentic; maybe they are. I don’t know. I would note that Hunter Biden and the Biden campaign have not denied their authenticity. It’s kind of like the dog that didn’t bark, but you would think that most news organizations would be committed to breaking news, that they would want to dig into it deeper; they would want to explain exactly what they found, as opposed to doing what the big tech companies did, censor it, and most of the mainstream media trying to suppress it to the greatest extent they can until November 3.

And this is not going to go away on November 3. Should Joe Biden win, there are still going to be questions about whether or not Joe Biden and his family and administration is exposed to pressure from China, from the Chinese Communist Party oligarchs. It’s the exact same thing that Democrats have accused Donald Trump of facing for four years without any evidence. So we have to get to the bottom of these things, whatever the result of the election is. The media is not doing the country any favors by essentially ignoring this story.

At this point Sorkin jumped in and set himself up for his own knockdown by piously declaring that Cotton wouldn’t want the media companies to allow reports on a story that they couldn’t corroborate. Watch the humiliating knockdown:

ANDREW ROSS SORKIN: Senator, I wanted to make two points. One is that the media industry—at least the media industry that I know, has been trying to investigate this and has not been able to corroborate the story. I would also note The Wall Street Journal, which is owned by News Corporation, which also owns the New York Post, has not been able to corroborate the story and said so, quite directly, in The Wall Street Journal today, in the news pages of The Wall Street Journal. So just to clarify, it is not that the news organizations are not looking into this, it’s that they haven’t been able to corroborate the story, and a responsible news organization wouldn’t therefore report it. Now the next piece of this is, you’re talking about the tech companies censoring such news.

If, in fact, the tech companies had liability like news operations do, you wouldn’t want them to be reporting something that they couldn’t corroborate, no?

And now the epic slam dunk by Cotton that rendered poor Sorkin into a stunned speechlessness.

Do you mean like the Russian collusion hoax and the Steele dossier that you reported on for four years, Andrew?