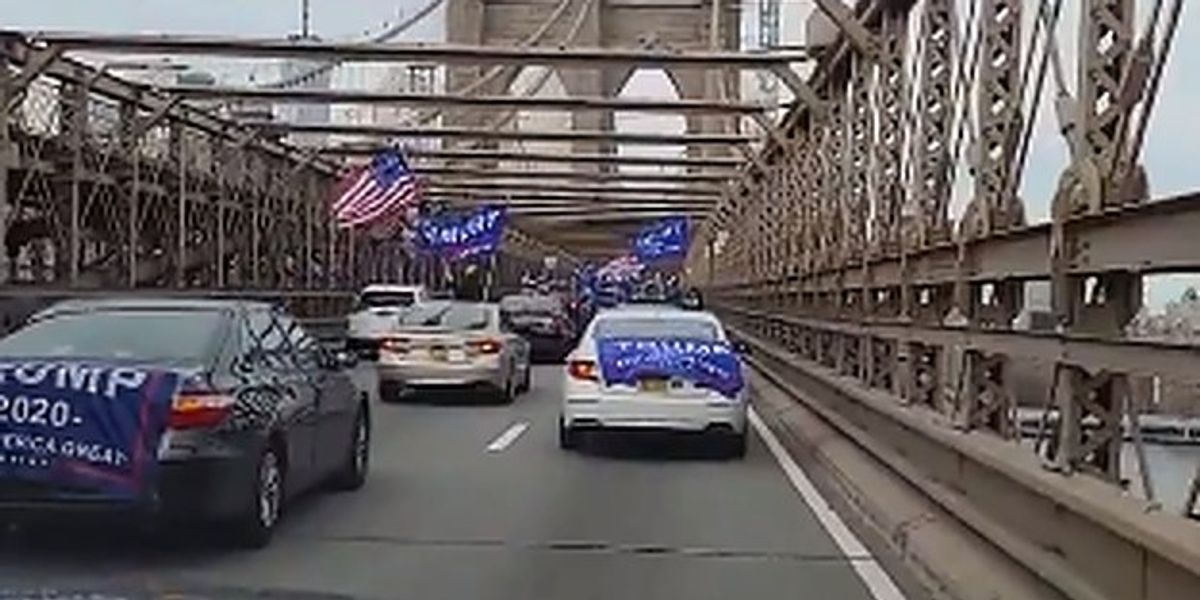 There was a massive pro-Trump car parade on Sunday in New York City. The parade was touted as the “largest Jewish car parade in history.” Vehicles left from Coney Island to drive by Trump Tower in Manhattan and finish with a Trump rally in a park in Brooklyn.

The convoy of cars and trucks plastered with “Trump 2020” flags reportedly stretched for miles. Former NYC Mayor and President Donald Trump’s lawyer Rudy Giuliani was also seen mixed in with the parade in Manhattan.

This will be the largest Jewish Trump car rally in the History of car rallies. Stay tuned. https://t.co/kXLTHBhhDB

This isn’t Pensacola or even Pennsylvania. This is just 10 seconds of a Trump car parade on NEW YORK CITY’s FDR Dri… https://t.co/MzPIUIjxhm

The “Jews for Trump” caravan was attacked by people throwing projectiles, including paint, eggs, and rocks, according to SV News. The egg-thrower allegedly made the mistake of recording himself throwing eggs at the vehicles and uploading the video online.

One man is seen punching one of the vehicles in the “Jews for Trump” parade. Social media posts show counter-protesters stomping on a thin blue line flag.

This man is so upset that a #JewsForTrump vehicle convoy practically shut down the Brooklyn Bridge while heading to… https://t.co/E9QaXIlLoC

The crowd is marching south on 6th Ave. — possibly to Times Square, the destination of the MAGA caravan. https://t.co/YoEvtJZZWm

As Trump supporters rolled through Manhattan, a black SUV with Trump flags was attacked by several individuals dressed in all black. The truck was splattered with red paint. As NYPD officers detained one man, a brawl erupted nearby. Then a man kicks the feet out from underneath another man, who falls on the pavement hard.

Another fight broke out in Times Square as tensions flared.

A fight broke out at the MAGA/ Proud Boys rally in Times Square. A Trump supporter can be seen swinging a baton at… https://t.co/sDU8hPSwGF

The NYPD declared an “unlawful assembly,” and made several arrests. A woman was reportedly arrested for pepper-spraying Trump supporters; she can be heard crying as she is being handcuffed.

Woman arrested for spraying pepper spray at the #JewsForTrump vehicle convoy on 5 Avenue in Manhattan. https://t.co/kfrwaLTJgT