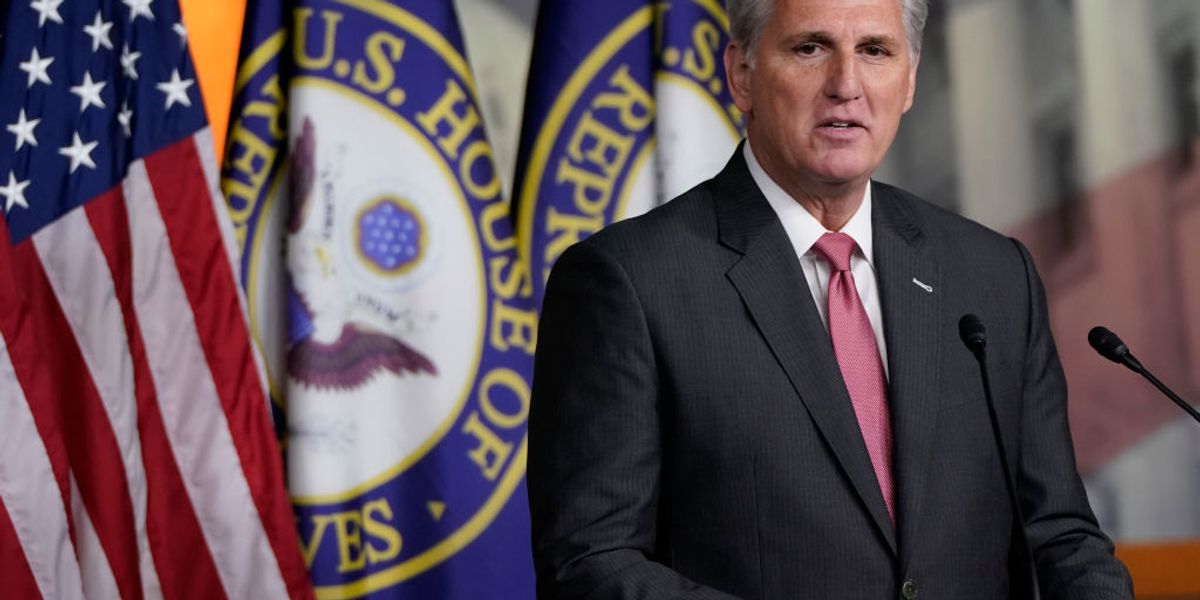 The Republican minority in the House of Representatives is pushing on moderate Democrats to break with Speaker Nancy Pelosi (D-Calif.) and pass a coronavirus relief bill that can advance through the Senate.

House Minority Leader Kevin McCarthy (R-Calif.) on Friday sent a letter to 23 House Democrats who were previously open to bucking party leadership and moving forward on a coronavirus stimulus without Pelosi’s backing, the Daily Caller reported. McCarthy’s office delivered the letter after Democrats once again blocked an effort from House Republicans to reconsider their coronavirus relief bill Thursday.

McCarthy urges his Democratic colleagues to file a discharge petition to force a House vote on a bipartisan stimulus bill, as they previously threatened to do in September.

“On September 27, nearly two months ago, you signed a letter to Speaker Nancy Pelosi stating: ‘It is our request that you continue to negotiate towards a bipartisan deal. Otherwise, a discharge petition is the only potential option for COVID-19 related action on the House Floor…’ As we know, no bipartisan deal has yet been reached,” McCarthy said in his letter.

I just sent this letter to the 23 House Democrats who told Pelosi in September that they would move forward with CO… https://t.co/KgSFSO8rBL

In September, 23 House Democrats urged Pelosi and Democratic Majority Leader Steny Hoyer (D-Md.) to “continue bipartisan negotiations” in pursuit of “meaningful relief for the American people” from the economic hardship caused by coronavirus pandemic lockdowns. The 23 Democrats said that if Pelosi did not reach an agreement with Republicans, “a discharge petition is the only potential option for COVID-19 related action on the House Floor and we do not believe that is the best path forward.”

The House has taken no action on the coronavirus relief since these Democrats put the discharge petition on the table. Now, McCarthy wants them to take action. He criticized Pelosi’s failure to negotiate with Republicans.

“Perhaps more discouraging is that even after Speaker Pelosi failed to secure a deal before recessing the House ahead of the election, you did not live up to your word to sign Representative Jaime Herrera Beutler’s Paycheck Protection Program (PPP) discharge petition. This legislation would free up $137.5 billion of unspent PPP funds. It would allow small businesses to take a second PPP loan and extends the PPP deadline until December 31, 2020,” McCarthy’s letter continues.

The White House is involved in the negotiations. On Friday, Treasury Secretary Steven Mnuchin told CNBC that GOP leaders will “come up with a plan to sit down with Pelosi and Schumer and try to get a targeted bill done for the people that really need it.”

ABC Presses Biden Chief of Staff for Investigations of Trump, Administration
Michigan Certification of Biden Win Is a Step Toward the End — But It’s Not the End
NYT listens to Twitter woke mob and changes article subhead in Jared Kushner, Ivanka Trump story
Steven Crowder plays the ‘Try To Laugh Challenge’: Late-night edition
10 Hypocrite Dems Who Prattle on About Masks and Lockdowns But Personally Act Like They’re All BS