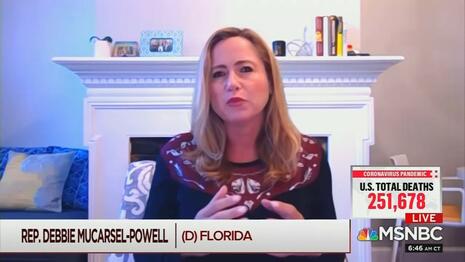 Despite having Joe Biden as the apparent winner of the 2020 presidential election, the Democratic Party has been frustrated since Election Day due to disappointing losses down ballot. Congresswoman Debbie Mucarsel-Powell of Florida appeared on MSNBC’s Morning Joe Thursday to angrily spew misinformation in the wake of her re-election loss.

After Joe Scarborough suggested that her loss may have had something to do with the left’s popular rhetoric promoting socialism and defunding the police, Mucarsel-Powell pushed back:

Look, I think that definitely had a negative impact on my race, on Donna Shalala’s race here in South Florida, but there was so much more going on that I think that a lot of people missed the boat on. And one of the things that I brought up early on is that there was a spread of misinformation… And the troubling part about this, is that this targeted misinformation wasn’t just happening in social media, in chats like WhatsApp, but it started penetrating mainstream media.

Well, it’s no surprise that the Democrat congresswoman would choose to ignore the possibility that socialist rhetoric might have been a nail in her re-election campaign’s coffin. But it certainly was interesting to hear a leftist cite the “mainstream media” as one of her problems, especially since they run propaganda around the clock to promote the Democrats.

Scarborough was probably thankful that she didn’t call him out personally for being part of her problem.

Trying to contribute to the autopsy of Mucarsel-Powell’s re-election, MSNBC’s Kasie Hunt asked: “Democrats lost seats when we didn’t expect that. What have you said to the House Speaker Nancy Pelosi about this? Why were they so blind to what was going on?”

Unsurprisingly, the House Democrat had a very sharp answer. “Um, there’s definitely something happening, Kasie, and I want everyone that is watching this show this morning to remember that we have one major problem, and it’s the party of Trump, the Republican Party,” she said. “They are definitely communicating with voters in a way that we’re not seeing.”

Perhaps Democrats like Mucarsel-Powell aren’t seeing that because they choose not to. Unfortunately, she was in good closed-minded company on Thursday’s show.

PBS News Hour’s Yamiche Alcindor was also on board to offer her thoughtful condolences. “President Obama has talked about truth decay, an idea that Americans can’t agree on the facts. How much of that do you think factored into your race, and what’s the solution for that,” she wondered.

The congresswoman wished that she had knocked on more doors, but she quickly made it clear that she would rather congratulate the Democrats on their other victories. Clearly, she was not there to take responsibility for her loss, nor to lash out at Democrats for their extremist rhetoric like her colleague Abigail Spanberger.

She and the journalists on Morning Joe wanted to attribute her loss to “truth decay” and “misinformation,” rather than the rebuke of socialist rhetoric that it was.

This display of ignorance was sponsored in part by Neutrogena.

Find the transcript below. Click “expand” to read more.

MIKA BRZEZINSKI: While Democrats will still control the house, Republicans flipped more than half a dozen seats, including two key battleground state- a battleground State of Florida. Uh, joining us now, Democratic congresswoman Debbie Mucarsel-Powell of Florida. She was one of those two Democrats who lost their seat on Election Day. Kasie Hunt is still with us as well, and also with us, White House correspondent for PBS News Hour, Yamiche Alcindor.

JOE SCARBOROUGH: So congress- Congresswoman, I’m sure you were hearing the same thing I was, I was following all the races really closely in Florida, and I knew you were in trouble, uh just like when you knew you were in trouble, because what I kept hearing over and over and over again were the same two things — socialism, defund the police. I’m not gonna vote for, she wants to defund the police. I’m not gonna vote for her, she- she supports socialism. And, and, you know, I get progressives on the show that don’t live in Florida, they go, “oh, no, no, Joe, it had to be something else,”– No, it wasn’t anything else. That’s all we heard. Not only in Miami-Dade. I heard it all over Florida.

REP. DEBBIE MUCARSEL-POWELL (D-FL): Yeah, good morning, Joe, good morning, everyone. Look, I think that definitely had a negative impact on my race, on Donna Shalala’s race here in South Florida, but there was so much more going on that I think that a lot of people missed the boat on. And one of the things that I brought up early on is that there was a spread of misinformation that was happening, targeted specifically to Latino voters in my area, in South Dade and in Miami-Dade County, and I actually joined Joaquin Castro to ask the FBI to investigate where this was coming from. And the troubling part about this, is that this targeted misinformation wasn’t just happening in social media, in chats like WhatsApp, but it started penetrating mainstream media, so you would hear misinformation in Spanish radio stations in Miami-Dade, um there was an insert that had been going on on a weekly basis for months in one of the main Spanish newspapers, El Nuevo Herald, so I think that it was the perfect- the perfect storm.

I mean, absolutely socialism had a negative impact, and the Republicans in Florida have been using those attacks against Democrats since 2016. And they have been repeating this false attack over and over again. But there were so many other factors, and that’s something that I think is incredibly important for the Democratic Party nationally and in Florida to understand. That our group, the Latino and Hispanic vote in south Florida is very diverse. That socialism may have affected certain parts of the Latino vote but not all of them. We also saw that we had an electorate that was ready to reopen, the economic consequences of this pandemic played a very integral part of how they were voting and what they were thinking. So you can’t just blame what happened in Miami-Dade to those attacks. There was so much more going on.

SCARBOROUGH: Uh, Kasie Hunt’s with us and has a question. Kasie?

KASIE HUNT: Congresswoman, good morning. To pick up on the last thought that you had here, I mean, we went into election night thinking and certainly frankly, my sources on both sides of the aisle, Republicans and Democrats, were expecting the Democrats were gonna pick up between at least five and seven seats if they had the good landslide night that they- many of them anticipated it was gonna be north of ten seats in the House, and that’s not what happened. And it wasn’t just your district across the map in fact, Democrats lost seats when we didn’t expect that. What have you said to the House Speaker Nancy Pelosi about this? Why were they so blind to what was going on?

MUCARSEL-POWELL: Um, there’s definitely something happening, Kasie, and I want everyone that is watching this show this morning to remember that we have one major problem, and it’s the party of Trump, the Republican Party. They are definitely communicating with voters in a way that we’re not seeing. And that’s why we missed the polling in so many areas, not only in my race, but across the country in different areas with some of my colleagues. They are using tactics that we need to figure out if we want to expand the map in 2022. If we want to win statewide in Florida, if we want to bring back some of these members in 2022. And there’s — like I said, there are a lot of lessons that we need to learn from what happened. We were not expecting these losses, like you said, Kasie. And there is definitely a problem with election interference. We knew that happened in 2016. We need to investigate how this misinformation was targeted in different areas not only in Miami-Dade. I have to tell you that I have been having a lot of conversations with my colleagues in south Texas. The same tactics were being used with different messaging in South Texas. And so I’ve been talking to the Speaker about this and she’s listening and she wants to understand how we can better communicate with Latino voters across America.

BRZEZINSKI: Yamiche Alcindor has the next question. Yamiche?

YAMICHE ALCINDOR [PBS NEWS HOUR]: Good morning, Congresswoman. My question is — hi. When you look at your race, what could you have done differently? Um, do you think to be re-elected, is there something you could have been done? And secondly, President Obama has talked about truth decay, an idea that Americans can’t agree on the facts. How much of that do you think factored into your race, and what’s the solution for that?

MUCARSEL-POWELL: Yeah, you know, when I look back, Yamiche, I have to say and I think for many of us, you start picking up certain messages that sometimes you ignore because you’re thinking, well, this is not gonna really influence the outcome. I think that we’re doing everything that we need to do at this point. Well, no, there were signs that I was picking up from friends that were sending me messages on their chats that they were getting a lot of attacks against Democrats that I hadn’t seen in mainstream media, for example. Um, so I wish I would have paid a little bit more attention on those things. We started knocking on doors regardless of what a lot of people across the nation were doing. I knew that I had to be present. I knew that I needed to talk to these voters. We did it in a very safe way. Maybe we should have started earlier, but the problem is in South Florida is that we were the epicenter of the coronavirus in July and in August, so we had to wait until we could contain the spread before we started knocking on doors, but I do wish that we would have done more knocking on doors, even though we did- knocked on more than 23,000 doors. Now, I think that one of the things that we need to take into account is that regardless of what happened in — on Tuesday, November 3rd, there are many bright spots. Look at what happened in Arizona. There was major outreach to Latino voters in Arizona and not just in this election but for years, and one of the things that the Republicans have known how to do in Florida is to continue to communicate with the diverse populations that we have. We have Puerto Ricans in central Florida, we have Cuban Americans and Venezuelan Americans in South Florida. Ecuadorians, Colombians, and Republicans have been communicating consistently with these groups in Florida, and that’s something that I have been sounding the alarm since I got elected in 2018. I’m the first South American immigrant to be elected to congress. I was a leader in bringing and talking about bringing freedom to Venezuela and providing humanitarian aid, so what happens in Venezuela is very important in south — in Miami-Dade County. Um, so those are the lessons that we have to learn. But let’s not forget that we elected President-Elect Joe Biden with a massive turnout of Latino voters in other areas like Arizona and Nevada. So we need to learn from those lessons, start communicating early. Doing our outreach and listening to what is important to every Latino and not just every Latino, but every—[connection failure].

BRZEZINSKI: Congresswoman Debbie Mucarsel-Powell, thank you very much for being on the show this morning. Great insight. Willie?