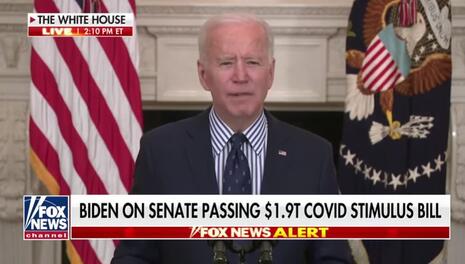 It’s Hulse’s latest “Republicans will cave in” story, Hulse’s favorite theme, in which congressional resistance to expensive or radical Democratic legislation is doomed to political and electoral failure. With a Democratic president in the White House, there’s suddenly “good intentions” from the executive branch, never mind Biden’s left-wing approach to governing thus far.

President Biden ran for the White House as an apostle of bipartisanship, but the bitter fight over the $1.9 trillion pandemic measure that squeaked through the Senate on Saturday made clear that the differences between the two warring parties were too wide to be bridged by Mr. Biden’s good intentions.

Not a single Republican in Congress voted for the rescue package now headed for final approval in the House and a signature from Mr. Biden, as they angrily denounced the legislation and the way in which it was assembled. Other marquee Democratic measures to protect and expand voting rights, tackle police bias and misconduct and more are also drawing scant to zero Republican backing.

Mr. Biden, a six-term veteran of the Senate, had trumpeted his deep Capitol Hill experience as one of his top selling points, telling voters that he was the singular man able to unite the fractious Congress and even come to terms with his old bargaining partner, Mitch McConnell, Republican of Kentucky and the minority leader.

Hulse actually let the other side have its say for a few paragraphs in the middle.

Republicans accused Democrats of abandoning any pretext of bipartisanship to advance a far-left agenda and jam through a liberal wish list disguised as a coronavirus rescue bill, stuffed with hundreds of billions of extraneous dollars as the pandemic is beginning to ebb….

At their private lunch recently, Republican senators were handed a card emblazoned with a quotation from Ron Klain, the White House chief of staff, calling the coronavirus bill the “most progressive domestic legislation in a generation,” a phrase that party strategists quickly began featuring in a video taking aim at the stimulus measure.

The comment was a point of pride for liberal Democrats, but probably not the best argument to win over Republicans.

Hulse glossed over how the proposals Democrats were pushing had nothing to do with the coronavirus crisis.

As they maneuvered the relief measure through Congress using special budget procedures that protected it from a filibuster, Democrats were also resurrecting several major policy proposals from the last session that went nowhere in the Republican-controlled Senate.

Foremost among them was a sweeping voting rights measure intended to offset efforts by Republicans in states across the country to impose new voting requirements and a policing bill that seeks to ban tactics blamed in unnecessary deaths. House Republicans opposed both en masse and the outlook for winning the minimum 10 required Republican votes in the Senate is bleak.

Hulse insisted Democratic ideas, “including measures to strengthen gun safety,” (a euphemism for gun control) were so popular the Republicans would suffer if they resisted them.

In getting Republicans on the record against what Democrats see as broadly popular measures, they are hoping to drive home the idea that, despite their party’s control of Congress and the White House, they cannot move forward on the major issues of the moment with the filibuster in place. They want voters to respond.

Hulse closed with the home team – the Democrats – and one of the party’s most partisan figures.

“Let’s face it,” Mr. Schumer said on the Senate floor. “We need to get this done. It would be so much better if we could in a bipartisan way, but we need to get it done.”