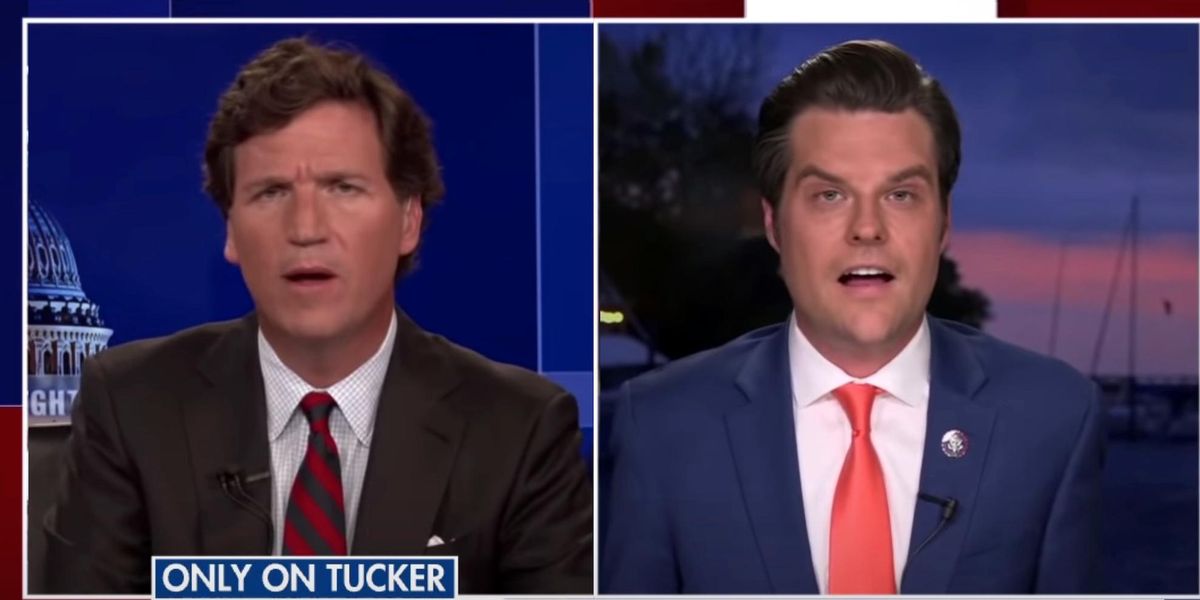 Republican Rep. Matt Gaetz of Florida appeared on Tucker Carlson’s show on Tuesday and denied allegations that he had sexual relations with a seventeen-year-old before naming a DOJ official who had attempted to extort his family for millions of dollars.

Gaetz offered additional details on the allegations published in the New York Times and said that people at the Department of Justice were trying to smear him.

“It is a horrible allegation, and it is a lie,” said Gaetz.

“The New York Times is running a story that I have travelled with a seventeen-year-old woman, and that is verifiably false, people can look at my travel records and see that that is not the case. What is happening is an extortion of me and my family involving a former Department of Justice official,” he explained

“On March 16th, my father got a text message demanding a meeting wherein a person demanded $25 million in exchange for making horrible sex trafficking allegations against me go away. Our family was so troubled by that, we went to the local FBI. And the FBI and the Department of Justice were so concerned about this attempted extortion of a member of Congress that they asked my dad to wear a wire, which he did, with the former Department of Justice official,” Gaetz continued.

“Tonight I am demanding that the Department of Justice and the FBI release the audio recordings that were made under their supervision, and at their direction, which will prove my innocence and which will show that these allegations aren’t true, they’re merely intended to try to bleed my family out of money,” he added.

At one point, Gaetz referenced debunked sexual harassment claims that had been previously made against Tucker Carlson.

‘You and I went to dinner’

Gaetz also claimed that Carlson had dinner with Gaetz and a woman who was later smeared by the FBI.

“I can say that actually you and I went to dinner about two years ago, your wife was there, and I brought a friend of mine. You’ll remember her,” said Gaetz.

“And she was actually threatened by the FBI, told that if she wouldn’t cop to the fact that somehow I was involved in some pay for play scheme that she could face trouble. And so, I do believe that there are people at the Department of Justice who are trying to smear me,” he explained.

“You know, providing for flights and hotel rooms for people that you’re dating who are of legal age is not a crime,” said Gaetz. “And I’m just troubled the the lack of any sort of legitimate investigation into me would then permute, would then convert into this extortion attempt.”

“I don’t remember the woman you’re speaking of, or the context at all, honestly,” responded Carlson.

Gaetz went on to name the DOJ official he claimed was trying to extort him as David McGee, a former DOJ prosecutor.

“His name is David McGee. He was a top official in the leadership in the northern district of Florida as a prosecutor,” said Gaetz. “I know that there was a demand for money in exchange for a commitment that he could make this investigation go away along with his co-conspirators. They even claimed to have specific connections inside the Biden White House.”

After a commercial break, Carlson called it one of the “weirdest interviews” he has ever conducted and said that it didn’t clarify much.

“Don’t quite understand it!” he added.

Here’s the wild interview of Gaetz on Carlson’s show:

Some MLB, NBA sports teams requiring ‘vaccine passports’ from fans for entry to venues
After What Biden Just Did to Them, Why Should Vaccine Manufactures Bother Next Time There’s a Health Crisis?
Disable farmer denied aid based on race speaks out on ‘Tucker Carlson Tonight’
Med Drama Celebrates Polyamory as ‘Love’ and ‘Freedom,’ Condemns US for ‘Imperialist Crimes’
Former FDA chief says now is the time to begin lifting mask mandates: ‘As aggressively as we put them in’