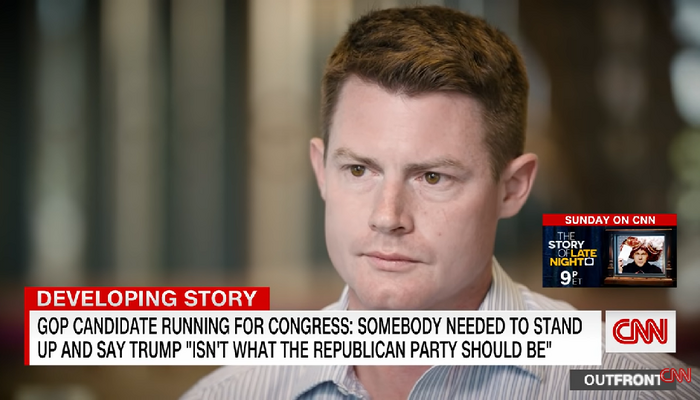 Good news for obscure Republican candidates! You can get intense glowing coverage from the mainstream media such as CNN but only if you project yourself as anti-Trump. Such was the case with Saturday’s special election in the 6th congressional district of Texas. There were 23 candidates in the open primary to fill the seat of former Congressman Ronald Wright who died in February. So guess who CNN focused on? You guessed it, the only Republican who  proclaimed himself to be at odds with Donald Trump.

So excited was CNN over that candidate that it sent their social-media correspondent, Donie O’Sullivan, to cover him for Friday’s Erin Burnett Outfront:

The segment kicks off with Erin Burnett asking the (for CNN) crucial question: “Tonight, a fight for the future of the GOP breaking out in a special congressional election in Texas that’s happening tomorrow. And of the 11 Republicans running, only one is campaigning on the anti- Trump message. Does he have any chance to win? Donie O’Sullivan is OUTFRONT.”

This was followed by O’Sullivan displaying utter adoration for the only anti-Trump Republican in the race. He also interviewed pro-Trump candidate Dan Rodimer, who actually moved into Texas after losing a congressional campaign in Nevada. And not only did the almost unknown anti-Trump Republican receive personal coverage from CNN correspondent O’Sullivan, he was also deemed worthy of commentary by former George W. Bush adviser Matthew Dowd, who mentioned he worked for a Democrat campaign in this area of Texas once.

Oh, and now for the reality check. On Saturday the anti-Trump Republican came in a poor ninth in the special election despite all that very friendly coverage from CNN. Rodimer came in 11th. Susan Wright, the widow of Rep. Ron Wright, who died of COVID-19 in February, came in first, and will go to a runoff with Republican Jake Ellzey. Wright was endorsed by Trump, which CNN took as confirmation that the Grand Old Party is collapsing. The Democrats couldn’t even make the runoff, and which party is doomed?

PS: On Tuesday’s New Day, CNN brought on Michael Wood to tell him he got his “clock cleaned,” which they underlined again is proof the Republican Party is in terrible shape.

As part of CNN’s 24/7 coverage of how much the GOP is a kooky and doomed pro-Trump party, they sympathetically cover anti-Trump GOP congressional candidate who came in NINTH in Saturday’s special election in Texas. Michael Wood says the dogs didn’t like his dog food! pic.twitter.com/hUxWxy9MbU

Tucker: Top House Republican lives with Google pollster
Twitter Bans Trump’s ‘From the Desk’ Account Less Than 24 Hours After Launch
Former FDA chief says now is the time to begin lifting mask mandates: ‘As aggressively as we put them in’
The Next Reality Candidate
DeSantis terminates all local Covid-19 restrictions, including mask mandates, in Florida