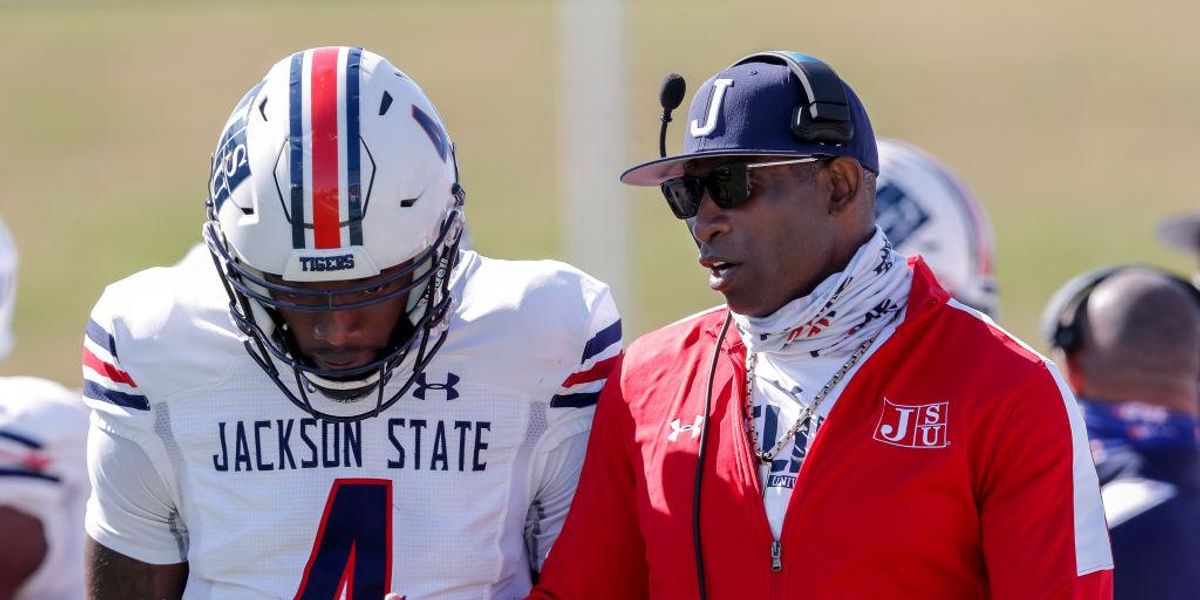 Deion Sanders says he was joking Tuesday when he ended an interview abruptly because a newspaper reporter repeatedly called him “Deion.”

If so, the NFL legend-turned-Jackson State University head coach cracked a bad joke at the SWAC football media day. He created the impression that the white reporter disrespected him because of his black race.

The reporter, Nick Suss of Mississippi’s Clarion Ledger newspaper, finds himself embroiled in a social media storm he did not create. Deion’s “joke” has made Suss’ job much more difficult. Twenty-four hours ago, Suss begged people on Twitter to “please stop tweeting about me.” He knows he can’t win this battle. A white man from Mississippi has little chance of surviving a racial conflict adjudicated via social media.

This is Suss’ “Mississippi Burning” nightmare. Only Deion can put out the fire.

Here’s what happened. Sanders specifically called for Nick Suss to ask him a question.

Suss responded, “Hey, Deion, just wondering if you could.”

Sanders cut him off: “Hold on, let’s back up a little bit. You don’t call Nick Saban Nick. Don’t call me Deion now. “

“I call Nick Saban Nick,” Suss politely fired back. “I call you Deion.”

Deion would not relent: “No, you don’t. No, you don’t. That’s a lie. If you call Nick Saban Nick, you know you’ll get cussed out on the spot. So don’t do me like that. Treat me like Nick.”

Sanders smiled and then began to laugh. “OK, Deion,” Suss retorted and began to smile and laugh, too. Sanders stood up and walked out of the interview.

Reporters immediately tweeted about the incident. The Clarion Ledger wrote a news story covering the exchange. Six hours later, Sanders released a video showing his interaction with Suss and ending it with a video of Sanders dancing to the mid-2000s rap song “Walk It Out.”

Now for the rest of the story.

On Monday, the Clarion Ledger published a story focusing on the domestic violence legal entanglements of Jackson State’s top 2021 recruit, four-star wide receiver Quaydarius Davis. He’s the highest-rated recruit in Jackson State history. He originally committed to the University of Kansas. Kansas cut ties with Davis in late March when a friend of Davis’ alleged victim posted two pictures of her in a hospital room allegedly recovering from injuries.

Deion is upset with the Clarion Ledger. Nick Suss is collateral damage.

Reporters, black and white, routinely call coaches by their first name. Heck, race-bait queen Jemele Hill even tweeted out that she covered Nick Saban and Tom Izzo at Michigan State and referred to them by their first names in interviews.

This is un-Christian. Sanders is a believer. He’s a flawed believer like the rest of us. I am a Deion Sanders fan. I love the work he’s doing and the attention he’s bringing to historically black colleges and universities. Deion is well-intentioned.

The road to hell and the road to Damascus are both paved with good intentions. In this instance, Deion needs to change course and head toward Damascus. He owes Suss an apology. He can’t write this off as a joke gone bad. It’s a bad joke that leaves Suss damaged.

As black people, we waste way too much energy interpreting the actions of white people and too little time evaluating our own. We foolishly believe their actions are more important than our actions. We’ve anointed them our gods.

Did he call me by my first name out of disrespect or because he’s familiar with me?

A couple of months ago, my best friend from high school’s son, an 18-year-old, called me Jason in a text message. We were communicating about his graduation gift. I corrected him and said, “Call me Mr. Whitlock.”

He apologized and explained that he’s so used to hearing his dad and mom talk about Jason that that was all he could think to call me. The kid is black. His whole family is black. Sometimes people get so familiar with you that it’s natural for them to become informal.

It happens to public figures. Reporters think they know the coaches they cover. When I worked in Kansas City, we called Marty Schottenheimer Marty and Roy Williams Roy. I haven’t lived in KC in a decade, I call Andy Reid Andy or Big Red.

Deion knows all this. He’s angry at a newspaper and so he gave into what’s popular on social media — race bait. He fired an unfair shot at a harmless, well-intentioned reporter.

The road to Damascus is just an apology away.